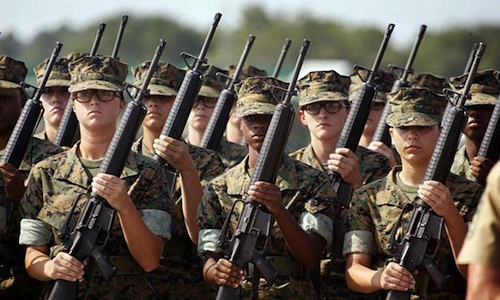 With a presidency that touts equality and anti-discrimination banners, the president of Family Research Council is amazed at what he sees as an extreme bias that celebrates secular, pro-homosexual groups while demonizing Christian, pro-family groups.

In the federal government’s latest crackdown on faith-based organizations having anything to do with the United States military, many children were disappointed when the soldiers they were looking forward to honoring were told they couldn’t step foot inside their church.

After planning to be saluted by boys and girls at Bible Baptist Church in Carthage, Missouri, members of the Missouri National Guard were soon forced to cancel their visit in accordance with federal policy, which reportedly forbids members of the military from associating with churches in order to avoid the appearance of sponsoring such faith-based organizations.

This is not a rare occurrence when it comes to Christianity and the military.

“Whether it’s erasing a Bible verse on a white board or the banning of pocket-sized Gideon Bibles from an Air Force base, our military service members, under the Obama administration, have experienced an unprecedented rise in the suppression of their religious speech,” said Family Research Council president Tony Perkins. “Members of the Missouri National Guard are now finding out that even associating with church members is enough to trigger a secularist clampdown.”

When the children at Bible Baptist learned they no longer had the opportunity to salute the soldiers, their pastor shared the disturbing story with the nation.

“We were going to thank them for protecting our religious liberty,” Bible Baptist Church pastor Kent Hogan told Fox News. “It was more of a promotion for the military – to show the kids what the military does.”

Proud to be an American, ashamed to follow military protocol

Regretfully having to obey authority, several members of the National Guard expressed to Fox News that they were “ashamed and embarrassed” over the whole situation.

“It makes me wonder what I’m actually fighting for … I honestly never thought I’d see the day that this would happen in my hometown,” one of the National Guard members shared with Fox News.

However, it came as no surprise to Perkins.

“Sadly, that day is here, but we must not lose heart,” Perkins insists. “The Armed Forces of the United States have defended our nation for well over two and a quarter centuries. Now it’s our turn to stand up for their right to exercise the very freedoms that they fight to defend. Please call the National Guard Bureau at 703-607-2584 or send an email respectfully voicing your objection to this discriminatory act.”

While churches and Christian organizations routinely been treated harshly by the U.S. military under the Obama administration, it’s a completely different story for LGBT events and organizations.

“It was only last month when President Obama authorized an eight-member military honor guard to march alongside half-clothed people and transvestites in Washington, DC’s gay pride parade,” Perkins points out. “These honor guards are typically reserved for the President, Congress and other state functions.”

With a presidency that touts equality and anti-discrimination banners, Perkins is amazed at what he sees as an extreme bias that celebrates secular, pro-homosexual groups while demonizing Christian, pro-family groups.

“While the Pentagon, under this administration, apparently is willing to bend the rules for a gay pride parade that salutes a different flag, they drop the hammer down on a country church planning to hold a patriotic celebration of the military,” Perkins asserts.

Christianity is unifying, not divisive

“In the times of greatest peril to life and limb, it is a great comfort to know that many of those with whom your life is entrusted share a commitment to each other, to the United States, and to God,” Perkins contends. “Simply put, devotion to moral principles derived from a Higher Power allows for a greater level of trust to exist among members of the military.”

Perkins argues that instead of declaring war on terrorism or anti-family agendas, the White House has done everything within its power to push policies that attack religious freedom and tear down the nation’s Christian moral fabric.

“Therefore, it is with great unease that we at the Family Research Council have noted a growing hostility to religion within the armed services in the last decade,” Perkins continues. “Unfortunately, pressures to impose a secular, anti-religious culture on our nation’s military services have intensified tremendously during the Obama administration.”

Perkins went on to present an extensive list of scores of very discrete anti-Christian events attacking religious freedom in the U.S. military over the past decade, with the rate of incidents spiking sharply at the onset of President Obama’s first term in office. Here are several notable incidents recorded over the past year:

“On October 17, 2013, soldiers attended a counter-intelligence pre-deployment briefing at Fort Hood, Texas, during which they were told that evangelical Christians and members of the tea party threatened the country,” FRC reports. “Additionally, they were informed that soldiers who donated to such organizations could be subject to discipline under the Uniform Code of Military Justice. According to sources, the counter-intelligence officer leading the briefing spent approximately 30 minutes discussing the ways evangelical Christians, generally, and groups like the American Family Association, specifically, were ‘tearing the country apart.'”

Out of all the U.S. armed forces, FRC notes that the Air Force displays the greatest aversion to virtually anything Christian. U.S. Air Force Academy graduate and attorney Mickey Weinstein has spurred numerous attacks over the years on Christianity in the military. He currently serves as the president and founder of the Military Religious Freedom Foundation, which he started in 2006 after both of his sons were allegedly exposed to Christian proselytizing at the Academy.

Since then, he has waged war against Christian and pro-family groups, particularly AFA, which he denounced as “bigoted, racist and vile” for its stance on Muslims in the military after the 2009 Ft. Hood massacre that saw U.S. Army Major Nadal Malik Hasan fatally shoot 14 (including a preborn child) and wound more than 30 others. Weinstein blamed the Islamic terrorist’s murders on “fundamentalist Christians” creating a hostile environment.

“Another campaign of agitation by Mikey Weinstein toward the U.S. Air Force Academy (USAFA) prompted its Superintendent, Lt. Gen. Michelle Johnson, to remove a poster containing the Academy ‘Honor Oath’ because the phrase ‘so help me God’ could be seen on it,” FRC reports. “That appears to have been a pyrrhic victory for Weinstein because over 20 members of the House of Representatives started to look closely at the USAFA’s handling of the four oaths related to Academy life. Their November 18, 2013, letter to Johnson pointed out that the 2012 edition of the cadet handbook misstated the content of three oaths thereby excluding ‘so help me God,’ even though this language was mandated either by statute or regulation (i.e., Oath of Office for Officers, Oath of Enlistment, and the Cadet’s Oath of Allegiance). This prompted an Academy spokesman to respond that the deletions were merely ‘editorial oversight[s]’ and that corrections were forthcoming.”

Two of the 35 attacks on Christianity and religious freedom in the military in 2013 targeted Christmas. The first saw a veterans’ facility in Dallas refusing to allow the delivery of Christmas cards from children because they displayed messages such as “Merry Christmas” and “God Bless You.” The other occurred at a VA hospital in Montgomery, Alabama, where young women delivering more than 100 gift bags and cards to veterans were denied because they contained religious messaging.

Critics contend that such events should come as no surprise under a president who has expressed since he took office that one’s faith should stay inside the walls of the sanctuary … and the military operates outside of church doors.

“The Obama administration raised red flags with religious-liberty supporters when Obama took office in 2009, as it started discussing religious freedom as the ‘freedom of worship,’ carrying the implication that you are free to believe whatever you want, so long as you confine it to your church building on Sunday morning,” concludes Breitbart News senior legal analyst Ken Klukowski, who also serves on the faculty at Liberty University School of Law. “This would deny your fundamental right to live out your faith in every aspect of your life the other six days of the week.”